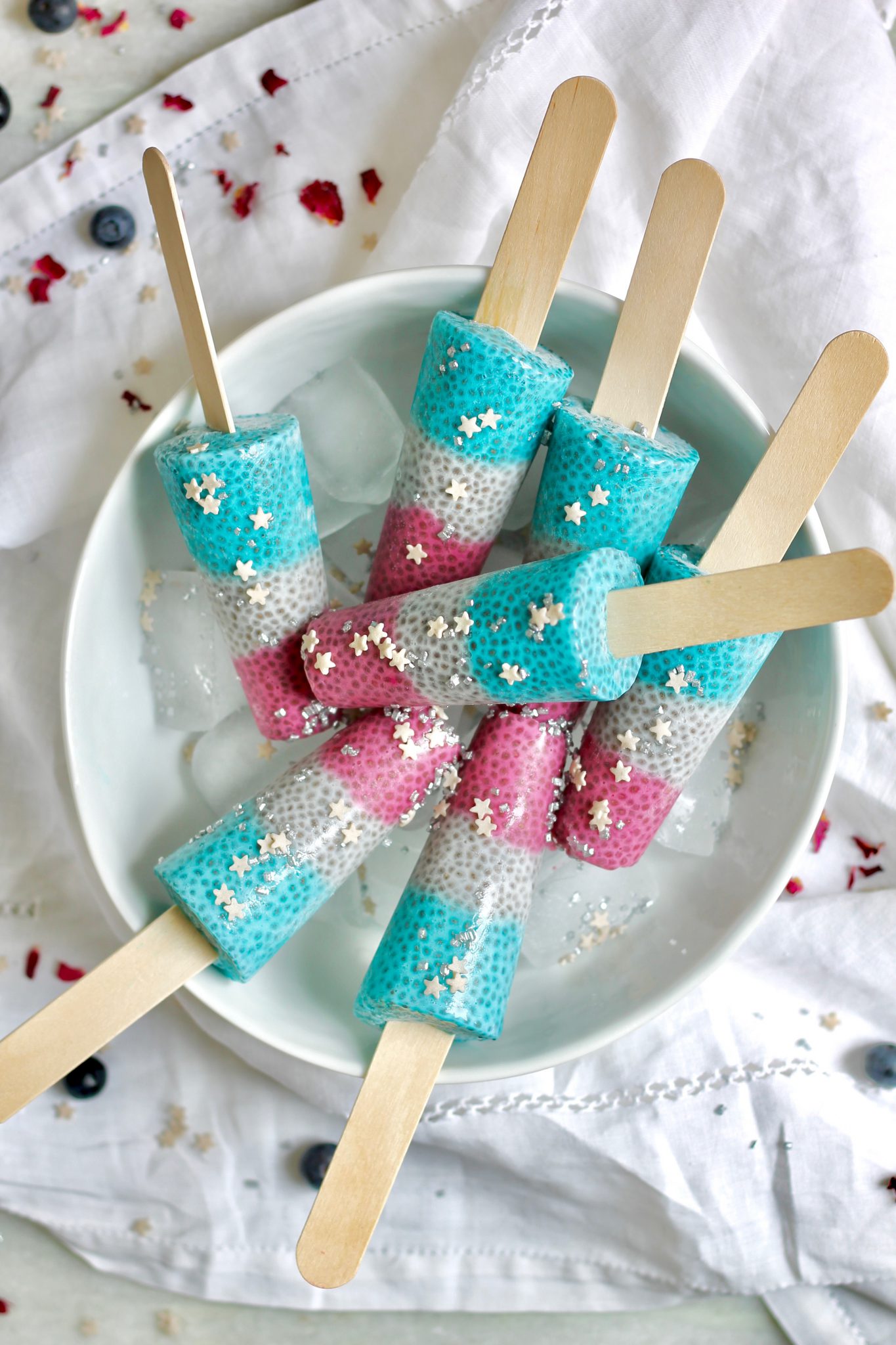 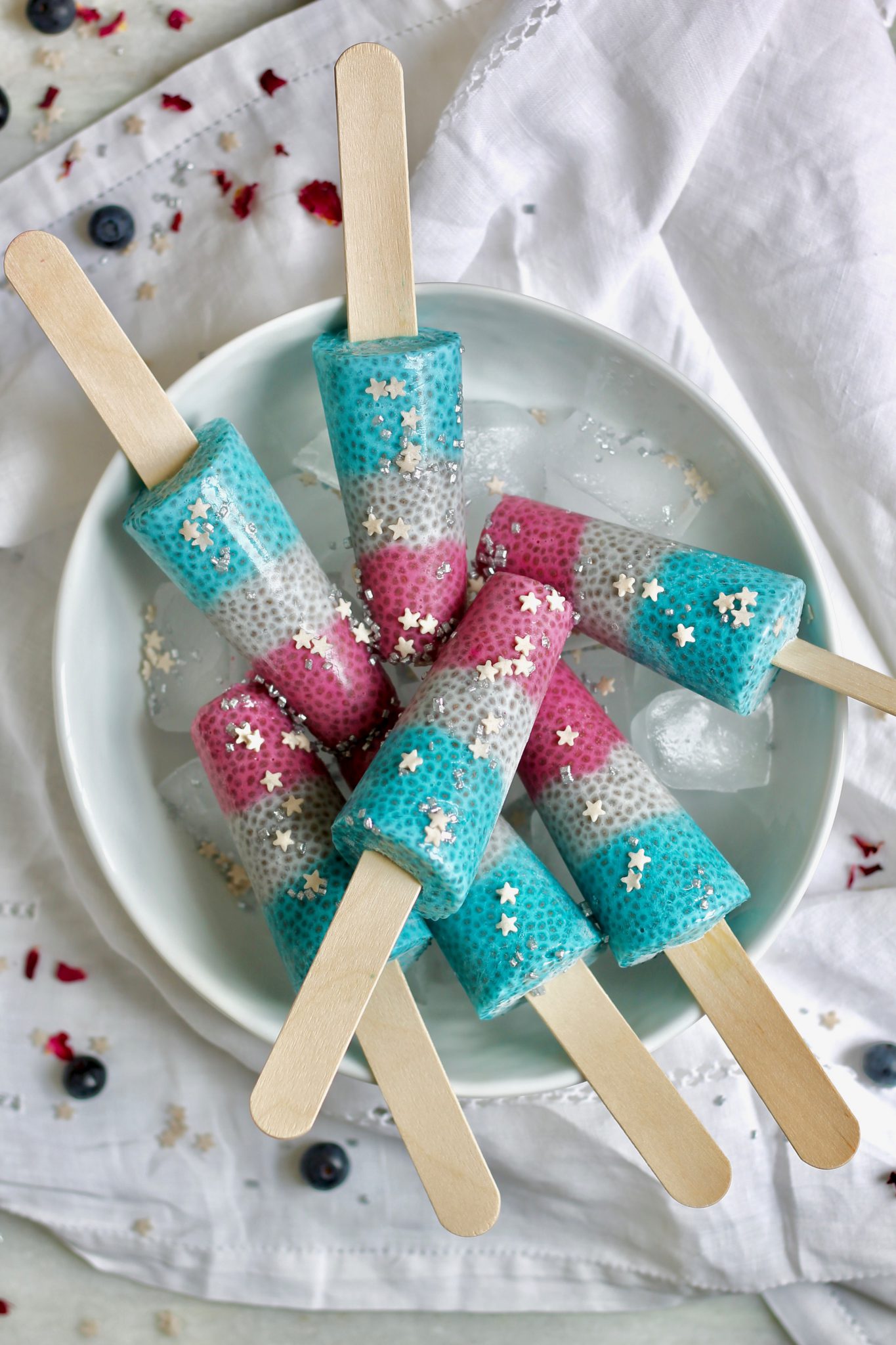 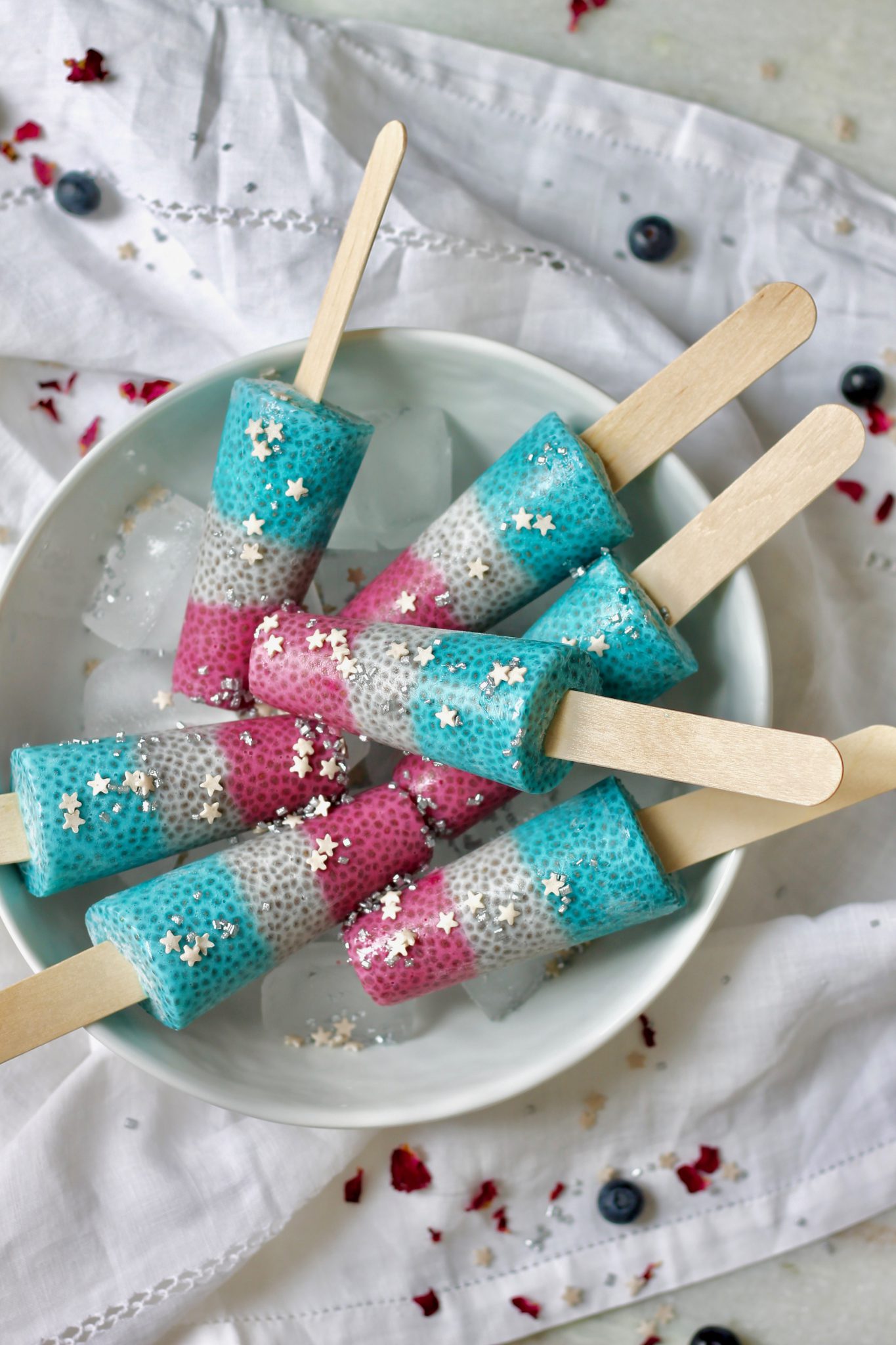 It’s a blast from the past with these Chia Rocket Pops! I was obsessed with rocket popsicles as a kid! How about you? In fact, they played a vital role in my childhood.  Whether it be a treat after soccer practice, a mid-afternoon snack after coming home from camp, or as a get well soontreat because I fell over and scraped my knee! So you could guarantee rocket pops were flying in my direction every which way!

I only wish they offered a chia option back then, because I’m over the moon with this creamy chia version!  Popsicle LLC., if you’re reading this, I’ll gladly accept a million in royalties for this million dollar idea! (Seems I have yet to grown out of my childish daydreams?)

Although Chia Rocket Pops are still to stock the frozen aisle of the grocery store, they are incredibly easy to make at home! It takes only 15 minutes of prep for these rocket pops to take off. And they’re probably one of the easiest layered treats I’ve made to date, because you don’t have to wait for one layer to freeze before continuing on to the next step. Since these Rocket Pops are made of chia, their firm structure allows you to pile one coloured layer after the next without freezing in-between. So you can do it all at once. In fact, it’s so easy you can get your kids involved too – here I am talking about opening boxes of Rocket Pops as a kid, how awesome would it have been to say I made them too!?

For the recipe, I found that almond milk was optimal in making a creamy and aesthetically beautiful chia popsicle base. I had originally tried using canned coconut as the base, but found that it was much more grainy in consistency and so didn’t mix as smoothly with the chia. Canned coconut milk tends to get clumpy when chilled, where as almond milk stays smooth. I recommend using my 10-minute homemade almond milk for this recipe, or your favourite store bought almond milk.This will allow it to be creamy and smooth. As for sweetness, some maple syrup will do the trick. You can add as much or as little maple syrup as you like, depending on your preference for sweetness. But I recommend making it sweeter than you’re used, because when frozen the sweet flavour is more muted. Trust me, you’ll thank me when it’s frozen!

As for the colouring, I used an all-natural pink and blue powder colouring that I bought from Alice Delice – a cooking store in Lille. I added just the teeniest pinch to get the vivid blue and pink colours in these pops. If you prefer not to use food colouring I’d suggest using blue agave powder and pink pitaya powder to give you the same colour profile. Unfortunately, I haven’t been able to find these in the health food stores here in France, but if they are accessible to you go ahead and use them!

So with that said I think you’re ready for take-off; to make the most delicious Chia Rocket Pops that will blast your tastebuds away! I give it 5 glowing stars for this simple and delicious recipe.

I’m sure these Chia Rocket Pops will have you soaring! 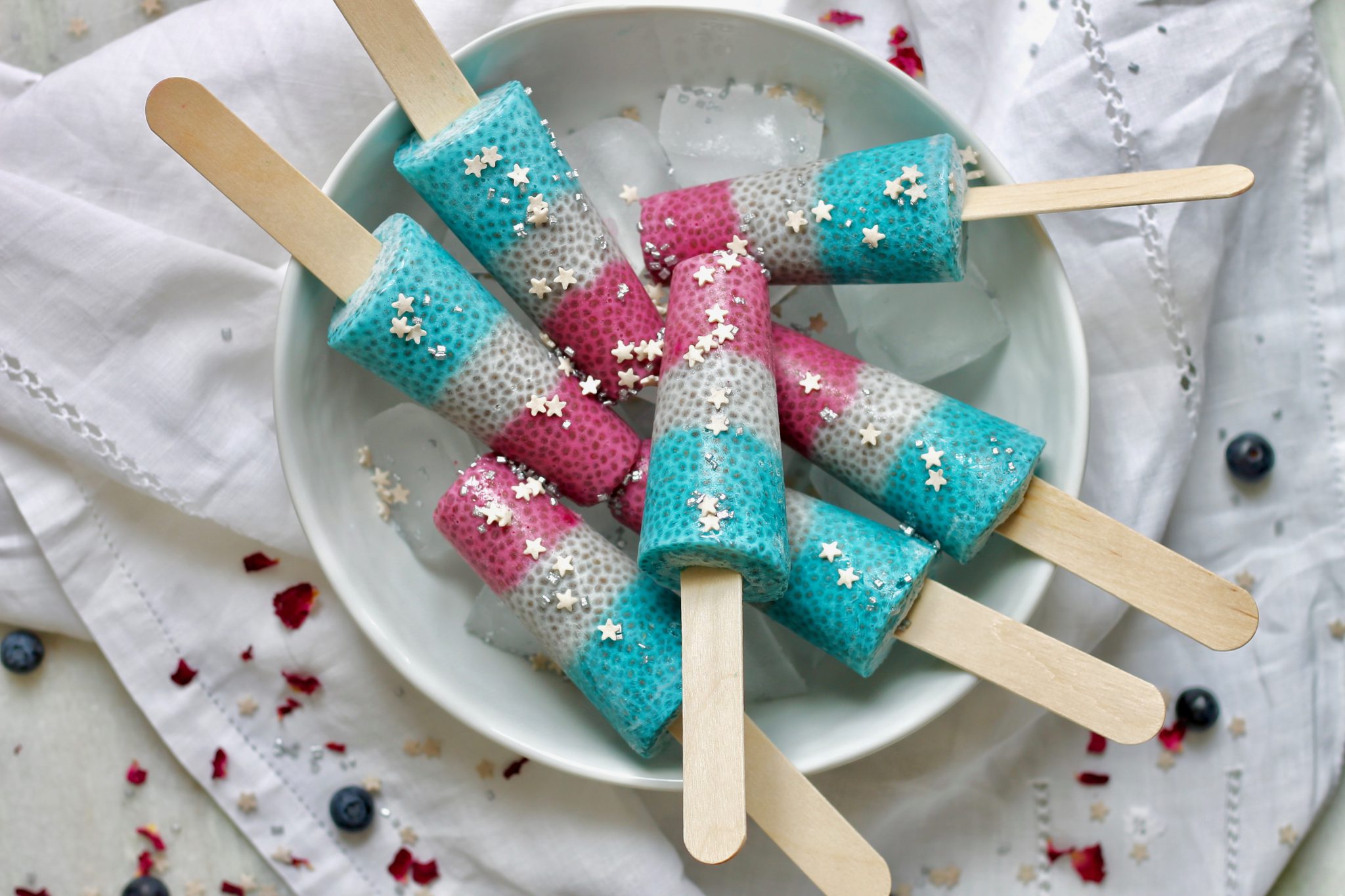 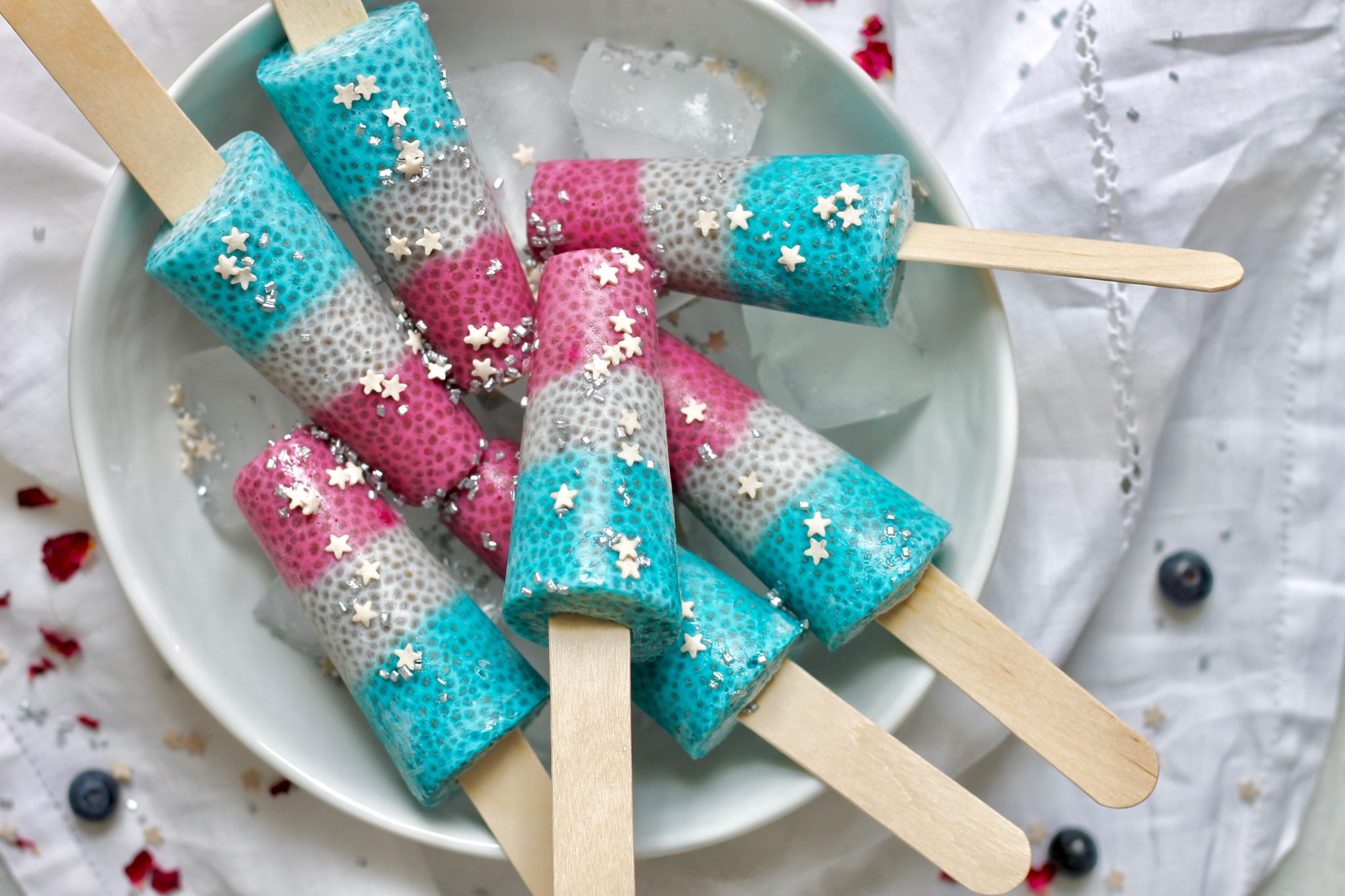 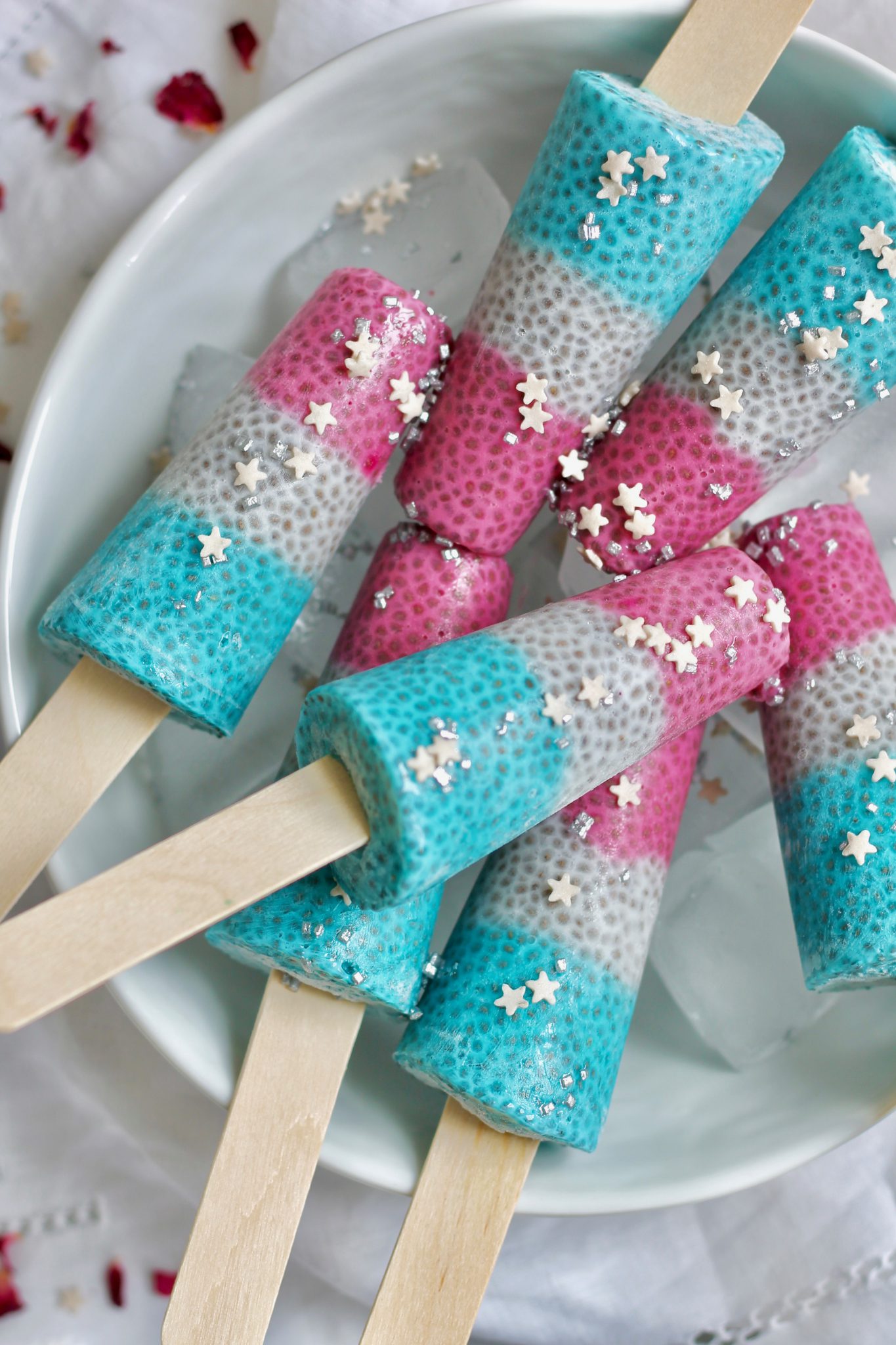 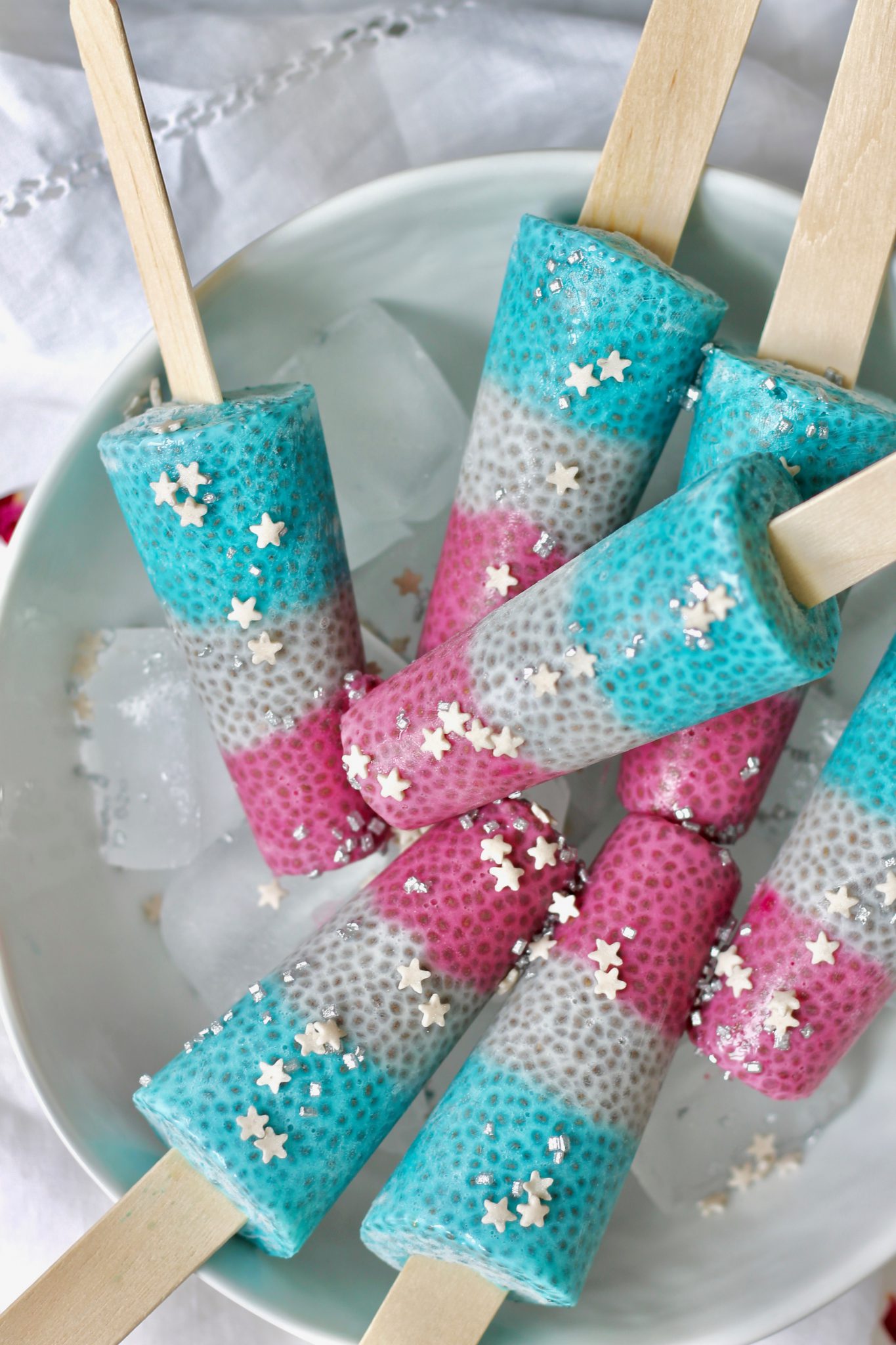 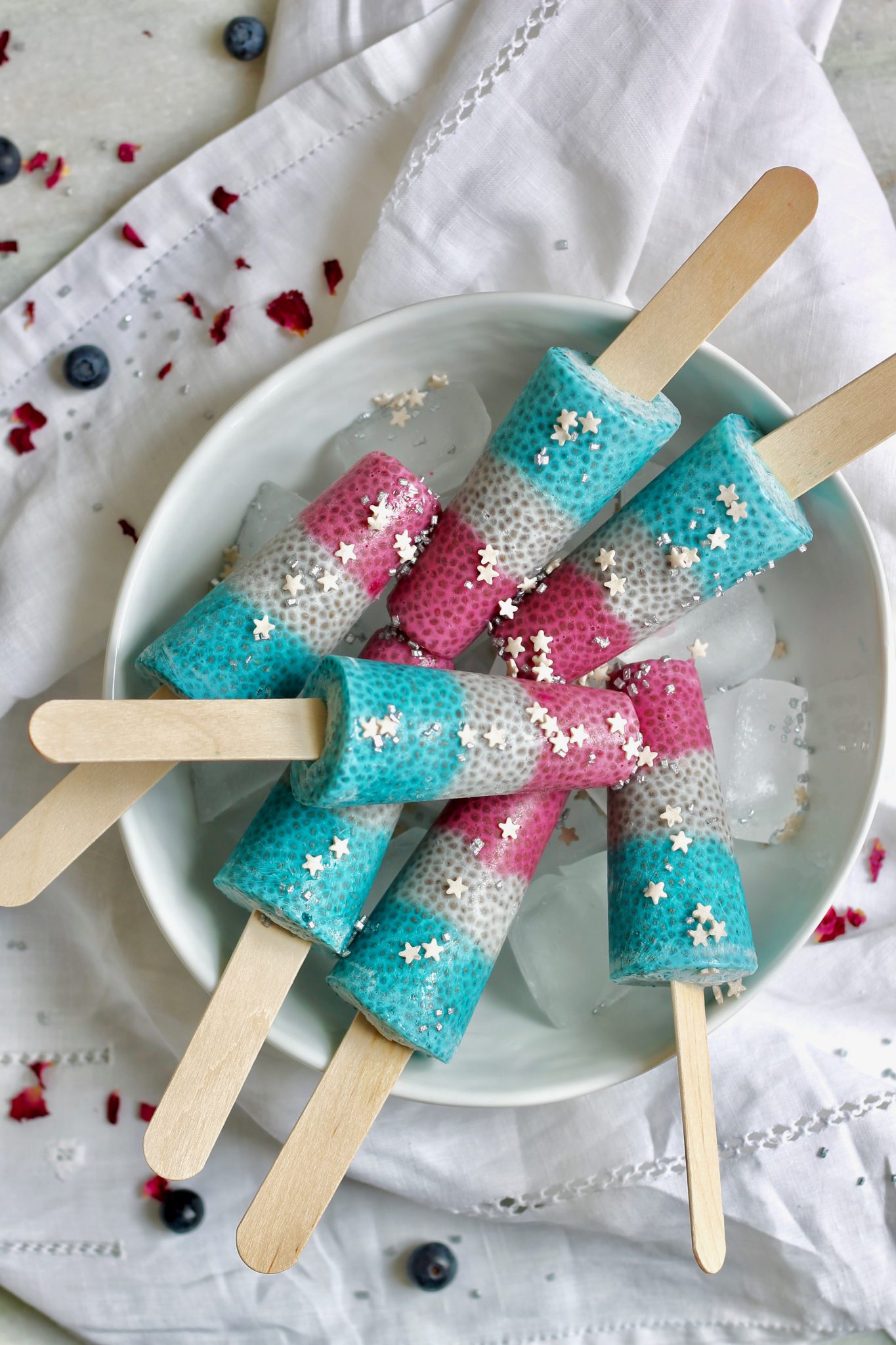 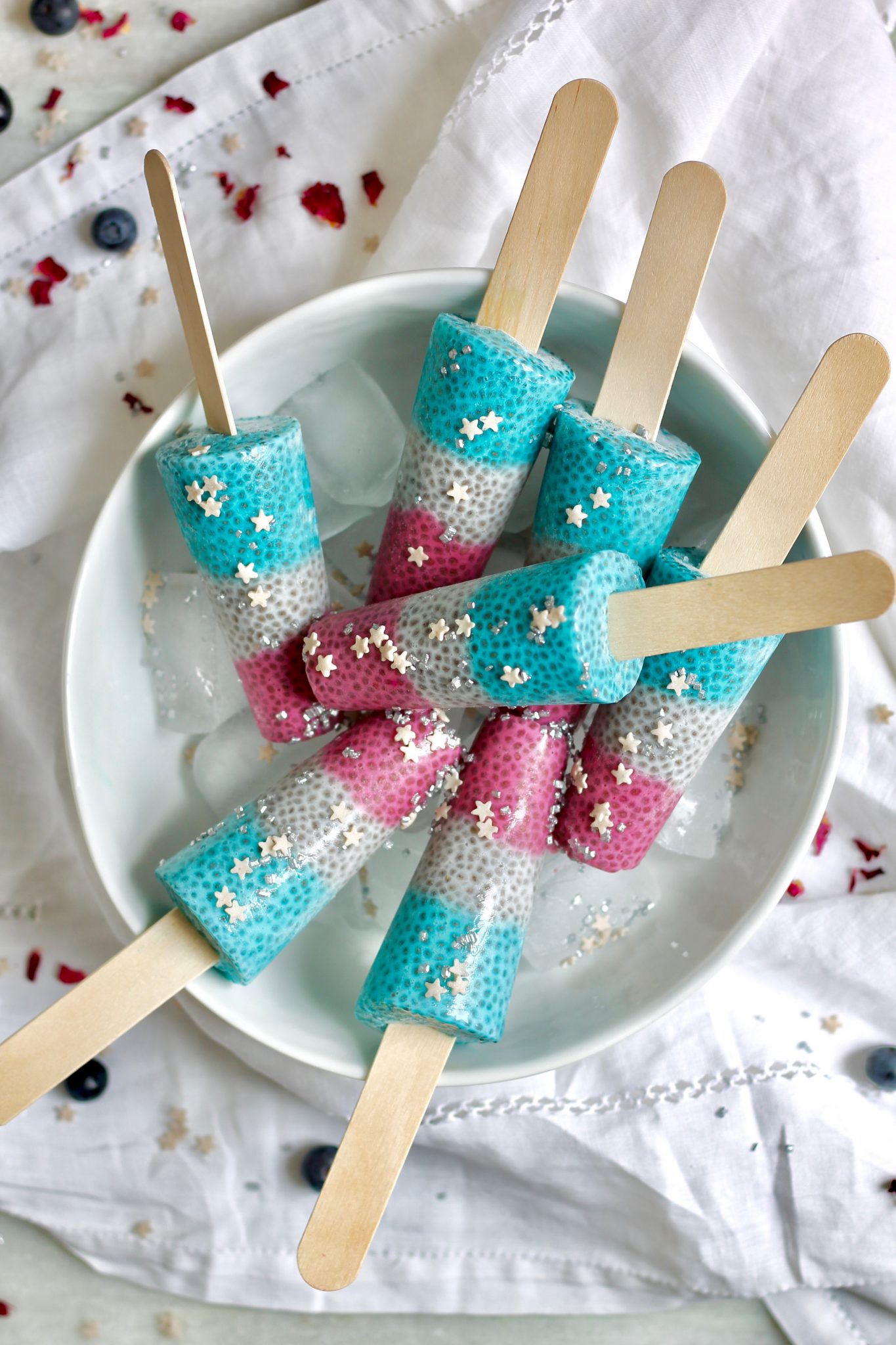 Print Recipe
Chia Rocket Pops
It's a blast from the past with these Chia Rocket Pops! I was obsessed with rocket popsicles as a kid! How about you? In fact, they played a vital role in my childhood. Whether it be a treat after soccer practice, a mid-afternoon snack after coming home from camp, or as a get well soon treat because I fell over and scraped my knee! So you could guarantee rocket pops were flying in my direction every which way! 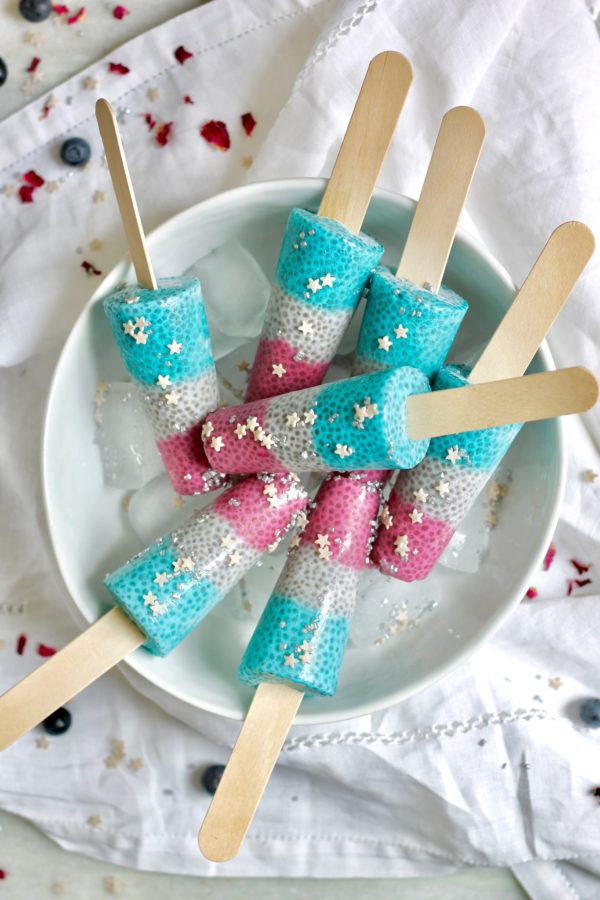 Immunity Boost Juice to fight cold and flu. With citrus fruits, ginger and turmeric. Packed with antioxidants and vit-c.
00 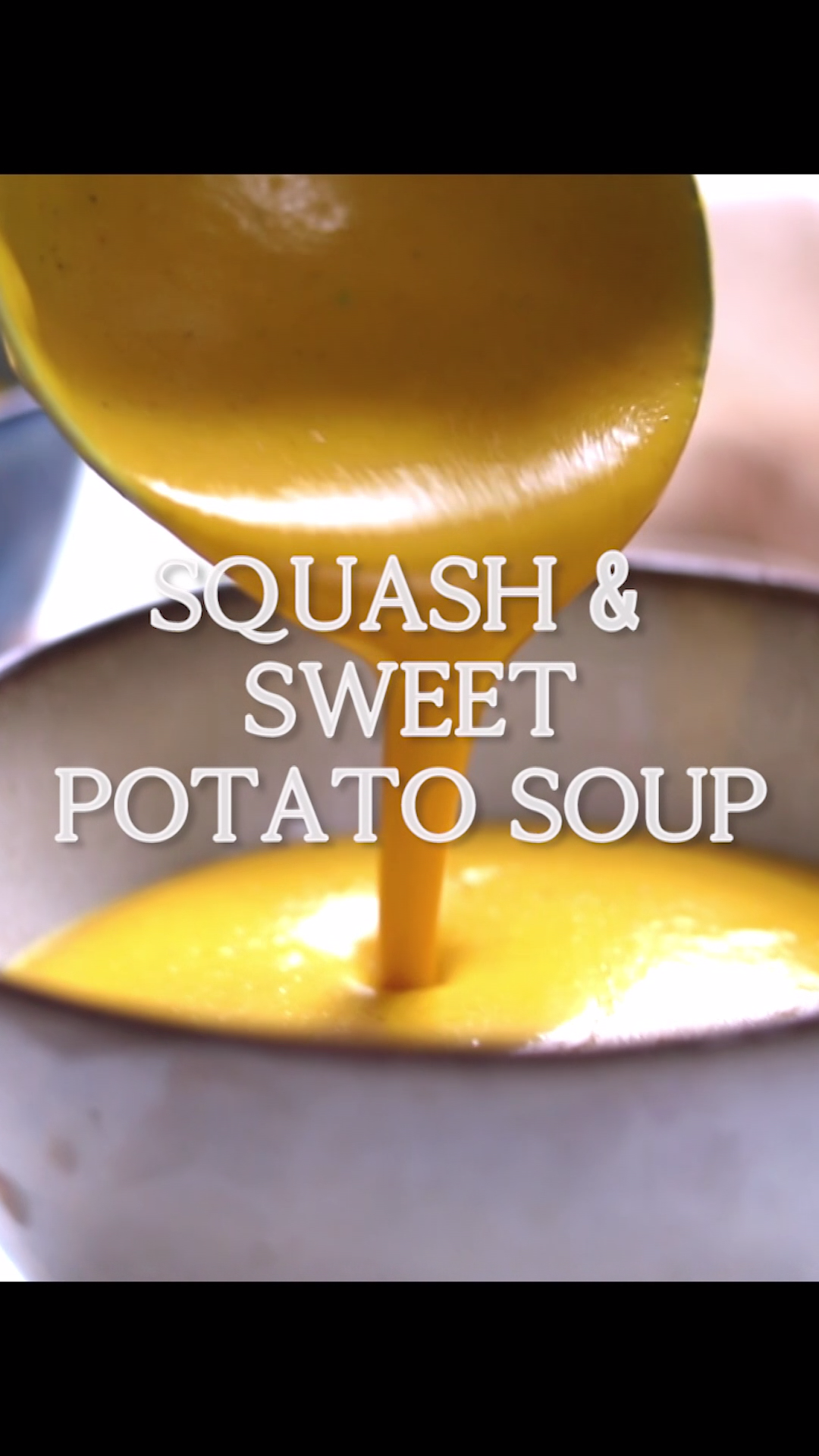